Guido Müller was captivated by the sound of the violin from an early age. At the age of 14 he became a student of the combined preliminary training of the Royal Conservatory in The Hague, where he came under the care of Qui van Woerdekom. In 1996 he graduated with Ilya Grubert as a performing musician with teacher’s endorsement. After graduating, he took lessons or masterclasses with Herman Krebbers, Jean-Jacques Kantorow, Pavel Vernikov and Zinaida Gilels, among others.

Since 2004 he has also been active as a conductor. He acquired his skills mainly in England; George Hurst was his most important mentor. 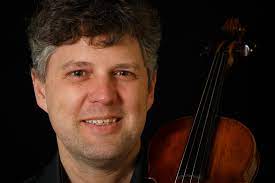